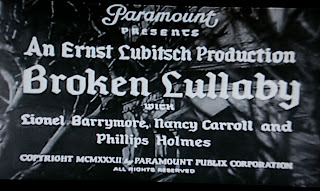 The other night I watched a somewhat profound precode film that has been lost to time. It's a rare occasion that I watch films that have war as their subject. In fact, I can count on one hand the films concerning war that I enjoy:
The Big Parade
Shoulder Arms
The Eagle and the Hawk
BUT...anytime I see a film with an early 1930's release date, I DVR it. Seven times out of ten there is something great about even the trashiest early 30's film. So, I see in this film's description three things that make me want to record it...1932, Ernst Lubitsch as director and Nancy Carroll...and one thing that makes me put off watching it...the film concerns the "effects of war". When I do get around to watching this film, I find myself (once again) wondering how these great films slip by those "Top 100 lists" of critics.
To start with...while the first 15 minutes of this film are incredible, the rest of the film kinda slips into a sort of rather maudlin sentimentality, but not badly enough to make me turn it off. Here we have the cast of characters: 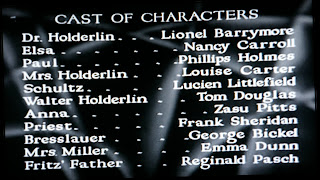 It's got a lot going for it, actor wise - a Barrymore, the wonderful Nancy Carroll in a rare dramatic role, a totally intense Phillip Holmes and Zasu Pitts thrown into the mix!
The first 5-10 minutes of the film are essentially silent, with fantastic imagery showing the end of WWI - the returning soldiers as filmed through a soldiers missing leg: 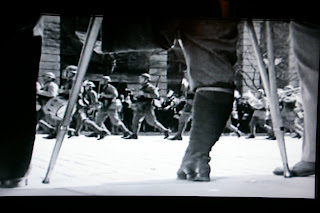 The church services celebrating the end of the war, with the soldiers swords in the church aisles: 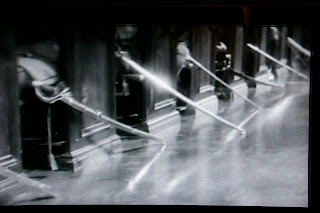 Then, and this is where the film grabbed me, the camera produces a shot of the empty church..with only one thing visible among the empty pews: 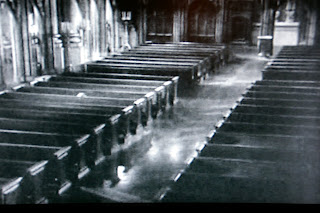 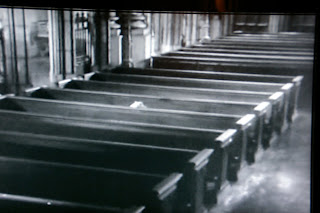 it is a single pair of praying hands: 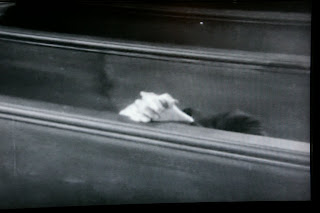 and a tortured face: 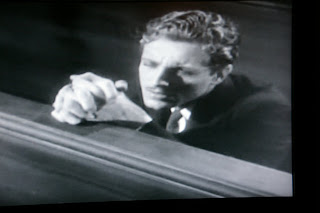 Paul is a returning French soldier, who is absolutely consumed with guilt over killing a German soldier on the battlefield:
"Father help me...I can't get away from his eyes." 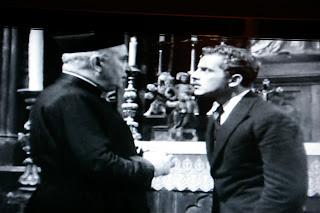 "I wasn't born to be a murderer!...I was a musician...there is no music left...nothing in my ear except the sound of a dying man!"
The priest decides to hear his confession, and the film takes us back to the battlefield, to watch as Paul kills the German solider, who was writing a letter to his girl back home: 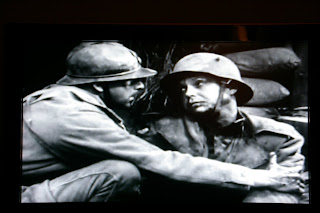 Paul helps him sign his name as he lays dying: 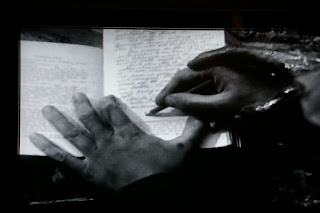 and the soldier dies in Paul's arms: 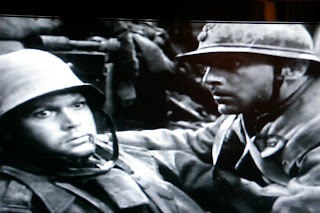 The priest attempts to console Paul with:
"The agony of your soul is unnecessary...you've done nothing but your duty." 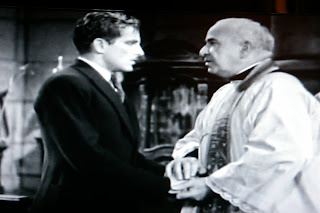 This statement completely unhinges Paul...
"Duty? Duty?? Duty to kill? Is this the only answer I can get in the house of God?" 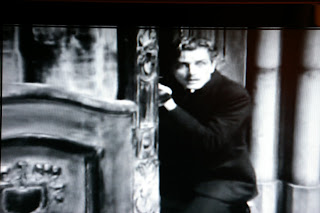 Now here is where the film gets a little strange for me...the priest tells Paul it would be a GOOD IDEA to go to Germany and find the German soldier's) family! "Go to his people" he tells Paul, thinking this will give him closure. I am not so sure of that.
Paul tells the priest: "You think I'm mad? Am I? Nine million people slaughtered and already they talk of another war! How many dead then? And the world calls that sane! Then I want to be insane! I killed one man...Walter...and I can't escape."
Paul makes his way to Germany and shows up at Walter's father's house, where he immediately chickens out on the plan to tell him he killed his son (as would I!) and tells the family he merely "knew Walter in Paris": 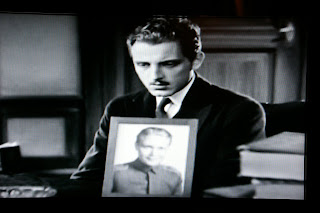 Now this family is as tortured as Paul is, the parents walking zombies since their son died and ex fiance Elsa is living with them to help them through this. At Paul's proclamation of knowing Walter in Paris during the war...the family brightens up, clinging to Paul as a last link to their dead son. They ply him for stories of their son, memories of his last days...you get the picture...this is not helping Paul! 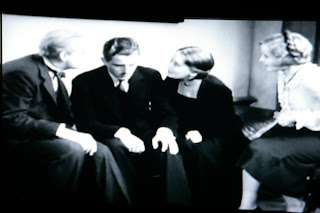 The movie ambles on a bit..then there is a GREAT scene with Barrymore ultimately breaking away from his French hating friends: 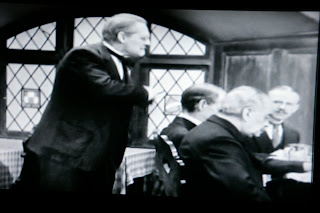 They cold shoulder him for befriending a Frenchman who killed Germans. Barrymore, still unaware that Paul is responsible for his son's death, lays into them:
"No one here can tell me the meaning of death or hatred...I've drunk deep of both of them. Who sent our boys out to kill? Who gave them the bullets, the gas, the bayonets? We did! The fathers! We're too old to fight, but not too old to hate! When thousands of other men's sons were killed, we called it victory and celebrated with beer!...and when thousands of our sons were killed, they celebrated with wine! Fathers, drinking to the death of sons."
He prepares to leave, then turns to lay into them some more:
"My heart is not with you any longer...old men.
My heart is with the young - dead and living - everywhere and anywhere!"
Outside the hotel, he pauses:
"I stood in front of this hotel when my son marched by...he was going to his death...and I cheered." 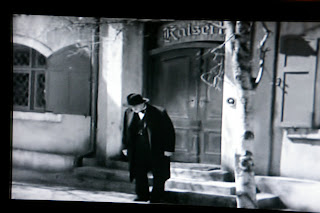 Meanwhile, back at the house, Paul can no longer take it...his tortured soul cannot find the peace he wants: 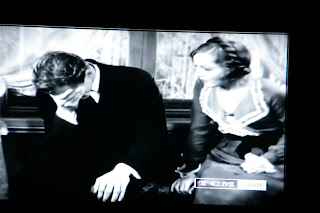 In a misguided effort to comfort him, Elsa decides to read Walter's last letter to Paul. YES, THAT LETTER...the one Paul helped the dying Walter sign. As she reads the letter aloud...Paul begins to say the last lines before she gets to them, and Elsa now KNOWS THE TRUTH: 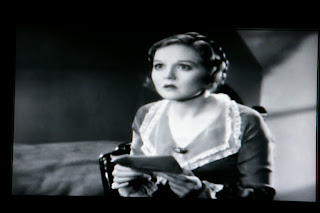 After berating the already unhappy Paul for coming to Germany and daring to come into the house of Walter's family, she ultimately forgives him and yes...they are now a couple: 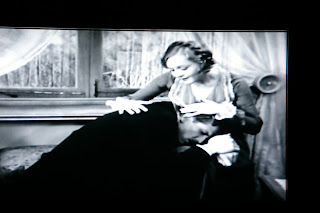 But this is no happy movie...by marrying Elsa, Paul will literally be TAKING THE PLACE OF WALTER in the family's home: 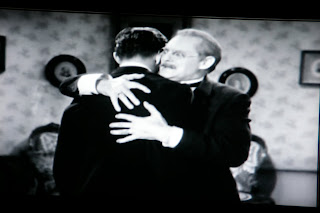 To celebrate that Paul has decided to stay in Germany, the family gives him Walter's violin and Paul begins to play what can only be described as "the saddest piece of violin music" I have ever heard: 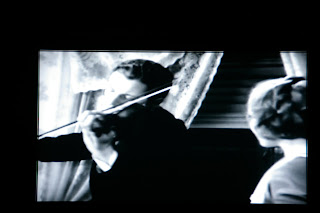 Music and life and love have entered the home again: 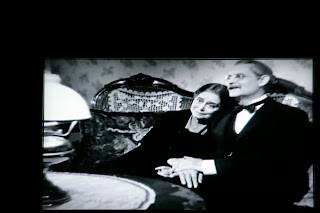 But, as I said earlier...this is no "happy ending" - the movie ends with "the saddest violin music ever" playing and Paul's sorta happy face comes into view: 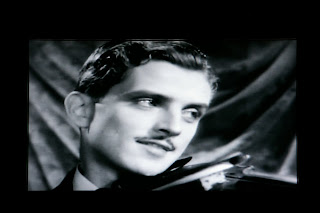 There is no real resolution here, though. Paul has given up his life to take the place of Walter in this house. Elsa knows Paul killed her fiance, and the parents I think are just happy to have some sort of link to their son.
Now I am not "anti" or "for" war - I see both the necessities and the evils of war. A precode movie like this dares you to think about the bigger consequences of young men killing for reasons they know not. I don't know how I feel about this. I still don't.
If you get a chance to see this film, do so.
Posted by JustMe at 4:25 PM 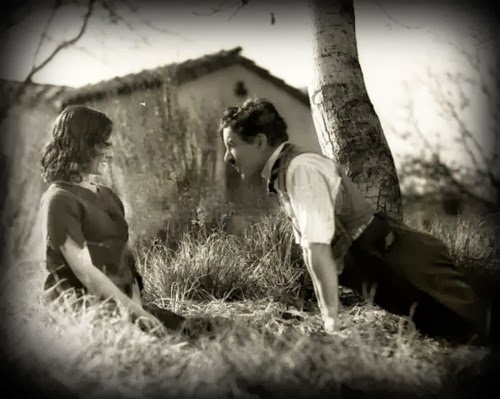 Kid Photo of the Day 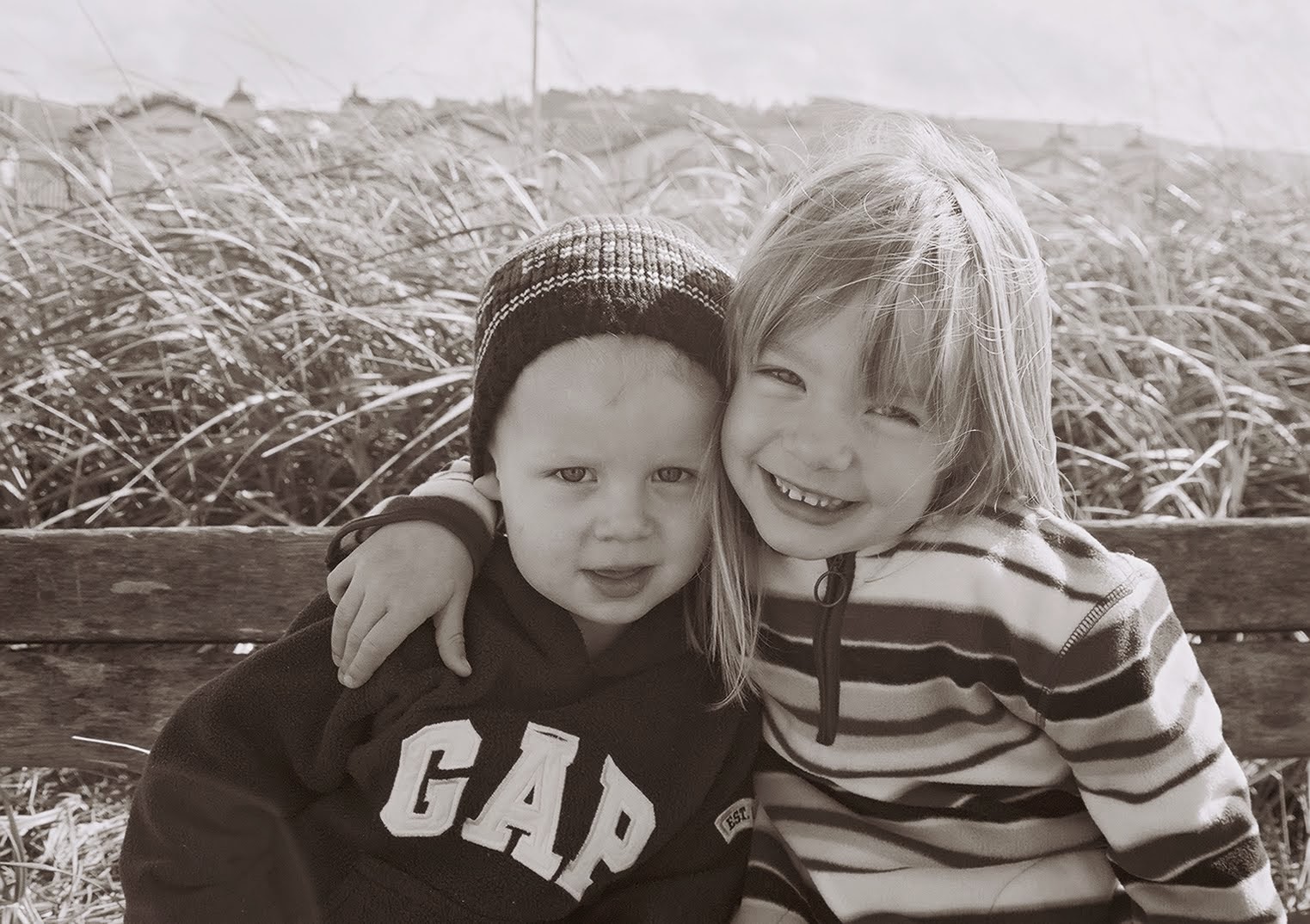 JustMe
I am a child of the 70's who lives for movies of the 20's and 30's. I'm also a native Californian happy to be living in the SF area still!

Animal Photo of the Moment 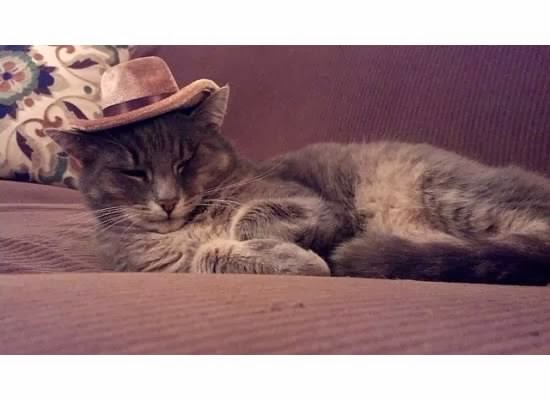 It's Halloween. So what.